“You could do worse, you always have!”

This presidential campaign from one perspective is absolutely hilarious.  If you have any sense of humor you have to sit back and laugh.  The so called press is truly apoplectic about Trump and have proven what many of us believe and that is that they are incapable of telling the truth about one of the parties.  The party that said there was no way that the Russians could have hacked emails are now convinced that the Russians are behind their nasty and embarrassing statements made public through WikiLeaks.  No one will admit there is voter fraud or voter intimidation even though there are folks out there on video admitting that they have committed fraud and will continue to do so again.  The comedy gets better when it is revealed that comedian Al Franken was probably elected by voter fraud and he was the deciding vote that made Obamacare the law of the land and now poor Minnesota is trying to make the best of a horrible situation.  Funny stuff coming from a state that is usually so busy trying to tell grocery stores they can’t use plastic bags and drivers bored to death in gridlock that they need to be nice to bicyclists, that the cost of heath care going through the roof because of something called the “Affordable Care Act” is last on a long list of issues.   All this stuff is of course considered off limits because we don’t want to besmirch the “sanctity of the electoral process”.  Now that should make peals of laughter ring through the land, but it gets better.  The hilarity really ensues when the stupid party lectures all of us on the fact that there can’t be voter fraud because Governors are in charge of elections.  Let’s see who are some famous governors?  Bill Clinton, George Wallace, Huey Long, Orville Faubus; right, there can’t be any shinanigans when governors are in charge.  But it gets even better!  A campaign bus dumped it’s full load of toilet contents on the street in a park somewhere and when people complained about it the campaign said that it was an “honest mistake”.  Besides the obvious reaction that this is what the campaigns have been doing to the whole country for a year, there is the less than obvious question of how many “dishonest mistakes” have they made?  But it gets even better.  This from Wikipedia – not WikiLeaks…………………….

The Alfred E. Smith Memorial Foundation Dinner is an annual white tie fundraiser for Catholic charities supporting needy children, held at the Waldorf-Astoria Hotel in New York on the third Thursday of October. It is organized by the Alfred E. Smith Memorial Foundation in honor of former New York Governor Al Smith, the first Catholic presidential candidate; the dinner is hosted by the Archbishop of New York (currently Cardinal Timothy Dolan.) 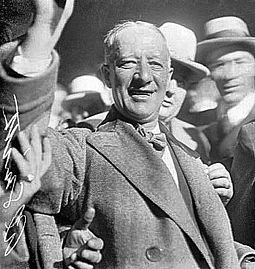 The first dinner was in 1945, the year after Al Smith’s death. It is generally the last event at which the two U.S. presidential candidates share a stage before the election.[1] Apart from presidential candidates, keynote speakers have included Clare Boothe Luce, Bob Hope, Henry Kissinger, Tom Brokaw, Tony Blair, and many other prominent figures in government, business, the media, and entertainment.[2]

Ok you ask, why is this funny?  Because tonight is the dinner.  The candidate whose campaign has been shown to have nothing but contempt for Catholics will be there along with the guy that called her a “nasty women” last night, to which of course there was the collective gasp from the permanently disgruntled.  They are supposed to engage in “good natured sparring” and be funny.  By now we should all be rolling on the floor laughing so hard we can’t breath.  Just imagine this women who has no discernable sense of humor engaged in “good natured sparring” with a man who makes fun of everyone.  This could be the most classic “bit” yet.  Donna Brazile has remarked that the Russians probably doctored or wrote those leaked emails as she exhibited a hilarious mixture of righteous indignation and pure stupidity when she was asked why she leaked a debate question to a debate participant.  So maybe the Russians, well known for their sense of humor can leak a few jokes to Hilary so that she can engage in cute banter.

But it gets even better for me because for whatever kind of synapse overlap, I have been calling the Alfred E. Smith dinner the Alfred E. Neuman dinner (sometimes I just crack myself up.)  I spent valuable time this morning looking up why I might have made this mistake.  What kind of strange thing was going on in my brain that made me get this in my head?  My humor goes to the comedic styling of Dan Cole, the Common Man on KFAN radio out of Minneapolis, (my guess is that he doesn’t find Al Franken funny either although I could be wrong since he is a Minnesotan) and the high brow sophisticated humor of Mad Magazine.  That is where it came from.  Buried deep in my subconscious was the magazines mascot, Alfred E. Neuman running for president with an election placard that read — “You could do worse, you always have!”

Priceless.  Remember that when you cogitate the “sanctity of the electoral process”.

You could do worse – you always have.

Rev. Bernhard Seter has been a Pastor in the Lutheran Church—Missouri Synod for 40 years. He served on the Board of LCMS World Relief and Human Care for ten years and is now the Chairman of the Board of International Missions. He has been privileged to travel around the world and see the churches mercy work in action. He is convinced it is not only what we are "compelled" to do because of Christ; it is what we have been baptized for. Christ love compels us, constrains us and sends us forth.

The Light and Light….

That Idea of Prayer – Who Is Odd?