Brexit This and Brexit That. 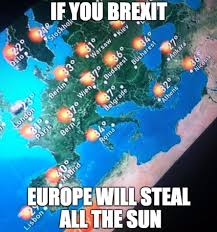 The folks at CNN are taking it personally that the Brits are leaving the EU.  It is as if their entire world view is coming unglued.  Why would anyone want to leave a command and control, centrally planned society that is controlled by the elites and a left leaning press?  They might have talked to the folks who live outside of London, but of course that will ever happen.  Bumpkins may have opinions but that doesn’t mean they have to be listened to.  They may have heard something like this……

So you are tired of having free health care but can’t get in to see a Doctor.  You are frustrated that people in Brussels decide what kind of tea kettle you are “allowed” to own in Liverpool.  You are frustrated that your wages have not increased in 15 years and your politicians talk about how great the economy is and how we need to “stay the course”.  You are fed up with political correctness especially when it comes to what kind of energy you can and cannot consume.  The elites, the rock stars, and the city folk tell you how great you have it, and when you complain they call you names.  So you get a chance to vote as to whether or not you want to stay in a Union that you consider oppressive and frustrating.  52 percent of your countrymen agree with you while 48 percent do not.  You find it interesting that ratio seems to be the same in almost every poll taken on any subject in your country and even in America.  The world seems to be split evenly on almost every important subject.

There is a lesson here for politicians if they will listen.  The politics and the rhetoric of division is a deadly thing.  The politicians who say that they are trying to bring us all together are usually the most divisive.  The ones who talk about love and compassion are usually the most vicious.  Calling people who don’t think that aborted baby parts should be sold out of coolers on the street the “equivalent of the Taliban” doesn’t go very far in creating unity. Announcing to the world that the hard working middle class in the country that disagrees with you are holding too tightly to “their guns and their Bible’s” certainly sits well with those who actually go to work everyday.  Saying that you plan to put coal miners and coal companies out of business and then back track on the statement is politics.  Saying that you cannot be responsible for every under capitalized small business is politics as well.  Put those two political statements together and you see an incredible amount of hubris that betrays a world view that 53 percent of us are terrified by.

Command and control liberals and central planner types might want to stop and think for a moment.  How can you control a massive thing like an economy if you can’t read the polls?  And by the way, not everyone who disagrees with you is a racist.

Project 24 and “Life Together”.

What I Would Have Preached On.